The cyclone Phailin and subsequent flood wreaked havoc in Ganjam district. The Phailin cyclone may have drawn more attention but the incessant rains and the floods after that caused more devastation in Ganjam district. Though the cyclone Phailin and flood claimed 17 lives, the livelihood of the people including agriculture and fisheries sector suffered heavily. Around 1,64,629 and 1,79,205  houses were damaged in cyclone and flood subsequently. There has been extensive damage to the standing paddy crop as a huge area of land covering paddy fields has been submerged in rain water Crops in 2,93,900 hectares were destroyed by Phailin while floods washed away crops in 51,566 hectares.

There has been huge loss to horticulture farming also as an enormous number of mango and coconut trees have been uprooted. Fisheries sector also sustained heavy loss as many fishermen were affected and their boats and fishing nets damaged. As per official records in marine fishing sector, 2,460 boats were completely damaged, while 944 were damaged partially. Apart from it, 2,460 motor engines used in fishing boats and 3,404 nets of marine fishermen were damaged by the cyclone. lack of boats and nets has affected fishing drastically even during this peak fishing period. Similarly, the children also bore the brunt of disaster. They have lost their study materials and other essentials.

A team consisting of Mr.Santosh Kumar Patnaik and Dr.Purushottam Sahu, from Council of Social Action (CoSA) visited the village Garampetta on 10th of November 2013 and discussed with the community leaders including the women leaders, village youth, PRI members and the Government officials. 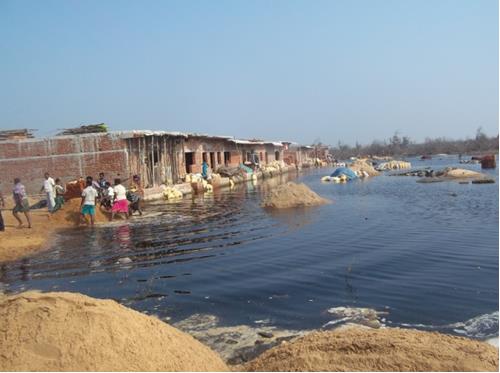 Garmapetaa is a hamlet village under Lahudigaon Revenue village in Keluapalli GP in Rangailunda Block. The village is located just 100 meters from the sea. The total household in the village is 270. All the families depend on fishing. There are 182 Pucca houses in the villages and the 98  families inhabit in old Garamapetta  near the sea  and all the 98 houses have been completely damaged by the cyclone phailin. There is primary school up to standard V. The village bore the brunt of cyclone and subsequent flood. The village remaind under water logging for nearly 12 days and communication was completely cut off. Even today, after one month of the cyclone phailin, water has not receded. The village has remained under darkness as the transformer and electric lines are badly damaged. 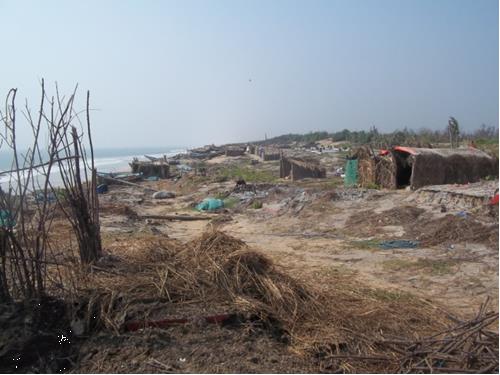 Before the onset of cyclone ie on the 12th night, people were evacuated to a cyclone shelter near Markandi which is 3 kms from Garampetta.People returned to their home the next day and found that all the houses have been washed away. Members of nearly 50 families in Old Garampetta are taking shelter in the relatives house. Barring the government food relief of 50 kg rice, nothing has reached the victims of this village. The relief team from NGOs could not distribute the relief materials as the village continued to remain under water logging and communication was affected.

It was noticed that 70 nets have been completely damaged and 20 boats damaged and 4 boats are  missing. This marine fishermen's hamlet comprises families displaced by the Army Air Defence College (ADC), Golabandha. In 1994 they migrated to this new place from where their old village that existed near Golabandha.

In view of the above situation it is planned to adopt the village and make interventions in the areas of livelihood and education for the school children. The Action plan will be chalked out in consultation with the community members. It s being proposed to undertake the following activities

Coordination: A rehabilitation committee will be constituted in the villages taking people from different sections including women, poor marginalized, youth, village leader to identify the most vulnerable people who will be covered under the proposed relief programme. The committee will prepare a list of people who will be supported for net and boat repair assistance.

Budget after reduced scope and cost containment through discussions between SEEDS and CoSA:

I report on a trip where I volunteered for two organizations: SEEDS (Sustainable Econ. and Edu. Development Society) and Pratham USA. I thank Intel Corp. for partially supporting my participation and paper presentation at the Read more…